from the International Economic Development Council.

...from the International Economic Development Council.

The honor was presented at a recognition dinner, Monday, October 4, during the IEDC Annual Conference, which is being held October 3-6, in Nashville, TN. 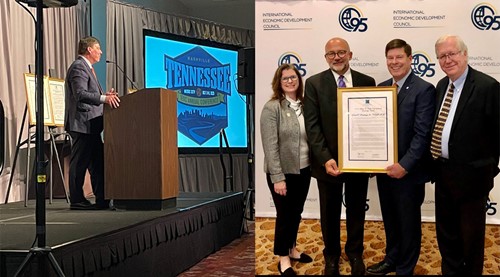 “On behalf of the IEDC board of directors and Honorary Awards Committee, congratulations to David P. Rumbarger, Jr.,” said 2021 IEDC Board Chair and President and CEO of Invest Buffalo Niagara, Tom Kucharski. “His outstanding achievements, hard work and dedicated service to the profession goes above and beyond to improve the quality of life for others.”

The Jeffrey A. Finkle Organizational Leadership Award recognizes an individual who has continuously led the same public or non-profit organization with integrity, tenacity, and philanthropic spirit for at least 15 years.

David Rumbarger Jr. has dedicated more than 35 years of service to working in various capacities at the state and local level in economic development. At the state level, as Director of the Alabama Department of Economic Community Affairs and at the local level with organizing and founding the Hattiesburg Area Development Partnership.  For the past 21 years, Mr. Rumbarger, Jr. has led the Community Development Foundation (CDF) in Tupelo, Mississippi as the President and CEO.

At the CDF, Mr. Rumbarger has grown the organization’s revenue 243%, helped create a scholarship for high school seniors, and focused on job retention and creation in the region amidst the recession. He sought out and expanded the industries in Tupelo and Lee County, creating over 7,400 jobs for local residents while adding more than 230 million dollars of payroll for these citizens.

In 2000, Mr. Rumbarger’s focus, as he joined the CDF, was tackling the double-digit unemployment numbers that hit during the recession of 2001. Through Mr. Rumbarger’s leadership, the Wellspring Project was founded, a three-county, three-city alliance created with the purpose of successfully locating a major automotive original equipment manufacturer (OEM) factory. He served as a co leader for project as the team marketing leader, managing the 16+ separate site visits by the Toyota location team. His efforts resulted in the recruitment of Toyota’s Corolla to North Mississippi, employing 2,200 people with more than 1.2 billion dollars of capital investment. There are ten more supplier companies in the region today, equipping the Toyota plant with component parts, resulting in 2,200 more employees through these supplier companies.

After recruiting Toyota, Mr. Rumbarger partnered with four adjacent community colleges’ workforce development directors after seeing a need for workforce training and apprenticeship programs with the recruitment of Toyota. He led the efforts to form a consortium with those four community colleges for the Toyota recruitment and training. He then helped Itawamba Community College in starting European-like apprenticeship program in 2008 for Toyota, and since then has expanded into 26 industries and 60 students.

One of Mr. Rumbarger’s most notable achievements was the creation of CREATE Foundation’s Marchbanks Helping Hand Scholarship. This gives every high school senior graduating from Lee County a two-year tuition free community college scholarship. Mr. Rumbarger was an integral part of the scholarship funding from public and private sources. This initiative inspired 17 other counties offering tuition guarantees. Since 2010, over 4,347 students have applied, and 2.5 million dollars of scholarships have been awarded to 1,551 students in Tupelo/Lee County.

“The achievement we experience is due to the consistent community leadership in Tupelo/Lee County and our great local partners at Three Rivers Planning and Development District, the Tennessee Valley Authority, CREATE Foundation, Itawamba Community College, and the Mississippi Development Authority; these partnerships working together have been invaluable in our success,” said Rumbarger.

Alongside his work at the CDF, Mr. Rumbarger has dedicated his time to other charitable organizations. He has been a Boy Scout volunteer at the local and national level, currently serving as the chair-elect of the Boy Scouts of America National Operations Leadership Council and he serves on the Board of the CREATE Community Foundation, the Mississippi Economic Development Council since 1990, and an active member of the International Economic Development Council (IEDC). He has received many professional honors and awards for his work at the CDF and beyond.

David Rumbarger, Jr. has shown that strong leadership and vision can have a lasting impact on a community. He serves his community with a dedication and passion that has been truly transformative to its region. It is because of Mr. Rumbarger’s vision for his organization, region, future leaders, and workforce that IEDC is honored to present the 2021 Jeffrey A. Finkle Organizational Leadership Award to David Rumbarger Jr.